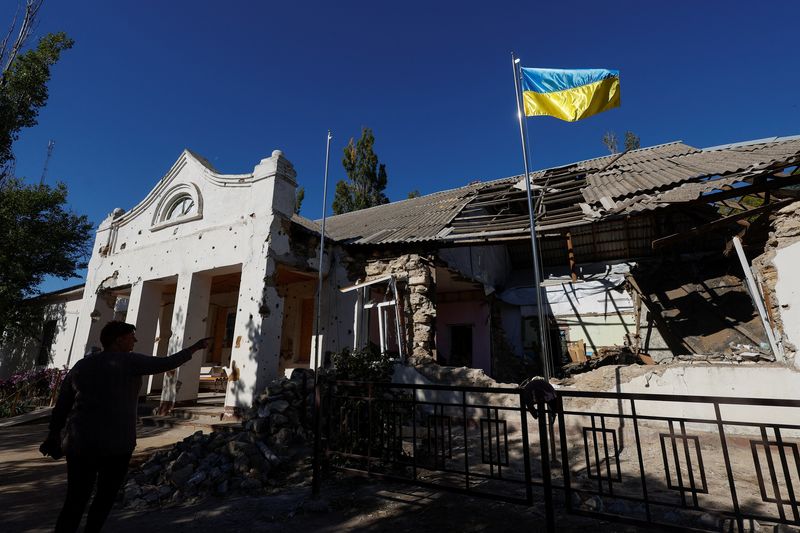 © Reuters. A Ukrainian national flag rises over a local council’s headquarter building, heavily damaged during Russia’s attack in the village of Lymany near a frontline in Mykolaiv region, Ukraine October 18, 2022. REUTERS/Valentyn Ogirenko

KYIV (Reuters) -The new commander of Russian forces in Ukraine made a rare acknowledgment of the pressures they were under from Ukrainian offensives to retake southern and eastern areas that Moscow says it annexed just weeks ago.

In another sign of Russian concern, the Kremlin-installed chief of the strategic southern region of Kherson on Tuesday announced an “organised, gradual displacement” of civilians from four towns on the Dnipro River.

“The situation in the area of the ‘Special Military Operation’ can be described as tense,” Sergei Surovikin, the Russian air force general now commanding Russia’s invasion forces, told the state-owned Rossiya 24 news channel.

On Kherson, Surovikin said: “The situation in this area is difficult. The enemy is deliberately striking infrastructure and residential buildings.”

Russian forces in the Kherson region have been driven back by 20-30 km (13-20 miles) in the last few weeks and are at risk of being pinned against the western bank of the 2,200-km-long Dnipro river that bisects Ukraine.

Vladimir Rogov, a member of the Russian-installed council governing Zaporizhzhia, also in the south, said Ukraine’s forces had intensified their overnight shelling of Russian-held Enerhodar – the town where many of the employees of the Zaporizhzhia nuclear power station live.

Artillery fire had hit the town’s outskirts and there had been 10 strikes around a thermal power station, he said on the Telegram messaging app on Wednesday.

Dmytro Orlov, who Ukraine recognises as the mayor of Enerhodar, blamed Russia for the shelling.

“The shelling, first of the industrial zone, and then of the city itself, began around midnight and it did not stop in the morning,” he said in a post on Telegram.

The Zaporizhzhia plant is in one of four Ukrainian regions Russia has proclaimed as annexed but only partly occupies, the other three being Kherson, and the eastern border provinces of Donetsk and Luhansk – together known as Donbas.

President Vladimir Putin proclaimed them as full-fledged regions of Russia after staging what Moscow called referendums in September, which Kyiv and Western governments denounced as illegal and coercive.

Ukraine’s military said on Wednesday that Russian forces had carried out attacks with cruise, aviation and anti-aircraft guided missiles across several regions, including Kyiv and Zaporizhzhia, in the past 24 hours.

“In addition, the occupiers used 14 Iranian-made Shahed-136 unmanned aerial vehicles, 10 of which were shot down,” it said.

Both Ukraine and Russia have denied targeting civilians, although Ukraine has accused Russia’s forces of war crimes.

Since Russian troops poured over the Ukrainian border on Feb. 24 in what Putin termed a “special military operation”, the conflict has settled into a war of attrition fought mainly in the east and south.

Russian troop positions in Kupiansk and Lyman in the east and the area between Mykolaiv and Kryvyi Rih in Kherson province were cited by Surovikin as under constant attack.

He appeared to concede that there was a danger of Ukrainian forces advancing towards Kherson city, near the mouth of the Dnipro on the west bank. Russia captured the city in the early days of the invasion and it remains the only major Ukrainian city that Moscow’s forces have seized intact.

Russian-backed officials have warned than an Ukrainian assault could be imminent.

Vladimir Saldo, the Russian-installed Kherson region chief, said the risk of a Ukrainian attack had led to a decision to evacuate some civilians from four towns.

“The Ukrainian side is building up forces for a large-scale offensive,” Saldo said in a video statement. The Russian military was preparing to repel the offensive, he said, and “where the military operates, there is no place for civilians”.

Last week, Russia unleashed the biggest wave of missile strikes against Ukraine since the beginning of the invasion.

Putin cast the air strikes with missiles and drones as revenge for an explosion that damaged Russia’s bridge to Crimea.

Ukraine has not claimed responsibility for the Oct. 8 bridge explosion but celebrated it.

Ukraine accuses Russia of using the Iran-made Shahed-136 “kamikaze drones”. Iran denies supplying them and the Kremlin denies using them.

Zelenskiy also said Russia has destroyed almost a third of Ukraine’s power stations in the past week, and he urged people to cut back on electricity consumption.